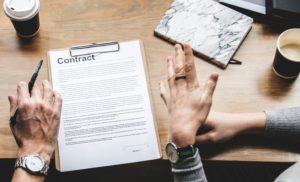 Despite tradition, franchisors should always carefully consider a request to negotiate an agreement.

Are you in a position to say no?

Franchisors of new systems may see negotiating as a quicker way to grow their franchisee numbers. However, being too eager to negotiate or too willing to part with your brand standards could devalue your system in the long run.

Franchisors of established systems don’t need to negotiate their agreements in order to grow their system. If a prospective franchisee is unsuccessful at negotiating and decides not to proceed, there will usually be someone else willing to take the same franchise agreement as-is. This is not to say that franchisors shouldn’t negotiate if a franchisee raises a valid request.

Be mindful of promises and representations you make to prospective franchisees. If you have previously promised something, then it may be unreasonable for you to then refuse to reflect that promise within the franchise agreement.

Franchise agreements are inherently drafted in the franchisor’s favour because you have established a successful business model that you have chosen to replicate through franchising. A franchise model’s benchmark of success is uniformity and consistency of quality and standards. Consider whether it’s in your brand’s best interests for one franchisee to operate differently to other franchisees.

From an administration-management point of view, franchisors prefer all franchisees to be on substantially the same contractual terms. If each franchisee has a franchise agreement tailored with different provisions, you can easily lose track of what rules each franchisee must follow. Uniformity removes the need for checking the particular agreement each time you answer a franchisee’s question.

The Franchising Code of Conduct requires the parties to a franchise agreement to act in good faith towards each other. This includes during negotiations. You must therefore act reasonably when considering an amendment request.

Importantly, good faith doesn’t prevent a party from acting in their own legitimate business interests. If you have a legitimate commercial reason for not agreeing to a particular amendment, then you are not necessarily acting in bad faith.

Under the Australian Consumer Law, contracts entered into or renewed from 12 November 2016 will be subject to the ACL’s unfair contract term protections if that contract meets the ACL’s criteria of a consumer or small business contract. The criteria are strict and whether the protections apply will depend on the circumstances.

If the criteria for a consumer or small business contract are satisfied, then a court could find a particular provision in a franchise agreement to be unfair and unenforceable if it:

A provision in a franchise agreement which satisfies these criteria and is not necessary to protect your legitimate commercial interests has the potential to be unenforceable. If you have not already done so, you should carefully review your template franchise agreement.

Always be mindful of the legal reasons behind many provisions in a franchise agreement. Carefully consult with your lawyer before committing to any change to avoid unintended consequences.

Whether or not you’re a new or established franchise system, franchisors must weigh up whether a request to negotiate is justifiable and reasonable against the protection of your system, and the enforceability of the provision in the future.

This article was previously published on the Inside Franchise Business website.