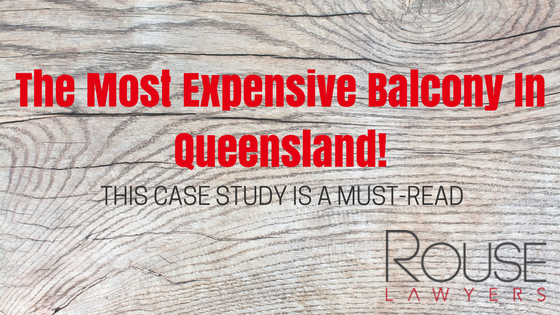 The High Court has recently overturned a Queensland Court of Appeal decision to find in favour of a body corporate, which was fighting an owner’s attempt to use common property airspace to expand two balconies in his apartment.[i] The essential issue before the High Court was whether the body corporate had acted reasonably in refusing the owner’s request.

Always get advice from a reputable property lawyer if you face challenges with body corporate management.

An owner at Viridian Noosa Residences wanted to join his two existing balconies, and the space in between them, to create one deck. To do so, he required the exclusive use of common property airspace – 5m2 – between the two balconies.

To proceed with the extension, the owner needed a resolution without dissent at a general meeting of the Body Corporate. In August 2012, the owner put his motion at an extraordinary general meeting, however some lot owners voted against it.

The owner appealed QCAT’s decision to the Queensland Court of Appeal who found, in November 2015, that the Commissioner’s decision was not wrong in law and QCAT should not have set it aside.

The dissenting owners then challenged the Court of Appeal’s decision in the High Court.

The High Court ruling and result

The High Court ultimately sided with the Body Corporate, finding that they had, in fact, acted reasonably and overturned the Qld Court of Appeal decision. This effectively restored the original decision of the Body Corporate made more than four years ago.

In discussing what it meant to act “reasonably”, the High Court stated that:

“opposition to a proposal that could not, on any rational view, adversely affect the material enjoyment of an opponent’s property rights may be seen to be unreasonable. Opposition prompted by spite, or ill-will, or a desire for attention, may be seen to be unreasonable in the circumstances of a particular case. But, as is apparent from the foregoing reasons, the adjudicator, the Tribunal and the Court of Appeal all appreciated that this is not such a case.”[i]

Importantly, the High Court made it clear that:

“the proposal in question was apt to create a reasonable apprehension that it would affect adversely the property rights of opponents of the proposal and the enjoyment of those rights. In these circumstances, opposition of the lot owners who dissented from the proposal could not be said to be unreasonable.”[ii]

What does this mean for body corporate managers?

Prior to this decision, there was a great deal of uncertainty about decisions of body corporates, which could be reversed on appeal for being “unreasonable”. With this High Court decision, a body corporate should find it easier to assess whether a proposed decision is “reasonable”, allowing them to take appropriate steps to reduce the risk of such a decision being held to be unreasonable.

Body corporate management is a complex legal environment, which impacts owners, investors and tenants alike. This High Court decision is one of many cases setting precedents for future decisions made in this area. If you have questions about your involvement with a body corporate, the Property team at Rouse Lawyers can help. Avoid turning property decisions into expensive legal challenges!

Need help and advice about any aspect of body corporate management? Contact the Property team at Rouse Lawyers today.

Enter your details below to contact a professional Property lawyer.