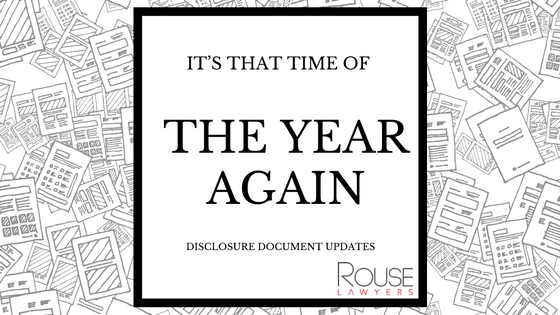 Updating your documents is an important part of running a franchise system and is mandatory under the Franchising Code of Conduct (the Code).

What does the annual update entail?

When carrying out their annual update, franchisors should consider the following details:

These must be prepared either in accordance with sections 295 to 297 of the Corporations Act 2001 or by an independent auditor. Your disclosure document must include financial reports for the last 2 financial years. The franchisor must also sign a statement confirming their solvency and ability to pay its debts.

Have there been any new franchisees, sales of existing businesses, terminations of franchise agreements, or franchisees whose operations have ceased?

Have there been any fee increases? For example, in some franchise systems fees increase annually in line with CPI increases.

4. Changes to the intellectual property

Has the franchisor rebranded, introduced a new logo or registered any new trade marks?

Does the Disclosure Document sufficiently cover everything, for example the expenses involved in a store upgrade? An upgrade can include a lot of different things including new software and point of sale systems, signage, furniture and store lay out.

Once updated, the Disclosure Document must be signed by a director or officer of the franchisor.

Failure to comply with disclosure obligations under the Code can result in an infringement notice ($9,000 per breach) or a penalty (up to $54,000 per breach) from the ACCC.

However, exceptions may be granted if no

the franchisor’s reasonable opinion, they will not be entering into any new Franchise Agreements, renewals, transfers or variations within the next 12 months.

What to do after you update

Updated disclosure documents don’t sit in a draw untouched. They need to be provided:

When is the update required?

Although an update is only required once per year, a franchisor must notify all of its current franchisees within 14 days if any ‘materially relevant’ facts arise. These can be found under clause 17 of the Code and include:

If any of the above arise, franchisors don’t need to provide an updated disclosure document – they only need to let franchisees know about the ‘materially relevant facts’.

If a franchisor operates a marketing fund, it must be audited unless 75% of franchisees who contributed to the fund vote otherwise. A marketing fund must also be audited within 4 months of the end of the franchisor’s financial year. This audit will cover the fund’s receipts and expenses for that financial year. The audited statement and audit report must be provided to franchisees within 30 days of its preparation.

If you need help with a franchise agreement or disclosure document, Speak to the team at Rouse Lawyers. Contact us today!